A TALE OF TWO TOWN HALLS

a new play by David Pownall

This was a political satire based on the UK’s latest financial crisis, requiring a massive loan granted in 1976 by the International Monetary Fund to James Callaghan’s Labour government.

I remember writer David Pownall having a hard time with those of my colleagues who were on the hard left. They were, not unusually, disdainful of what they considered his small-l liberal political analysis. I was naive about such matters at the time. To me, it was impressive that David had manage to find any drama at all in the subject.

I had a nice role, as a kind of hippy Mr Fixit, for which I wore a greasy wig and a huge sheepskin coat. At least, I think it was sheepskin. The photo below, in which I’m talking to David Boyce,  shows my face with a kind of instant tan on it. I don’t know, and can’t guess, why that would have been.

My other memory of the production is the minor scandal which attached to the inclusion of a small section of masonic ritual,  culminating in an authentically masonic, surprisingly jaunty song, for which I provided piano accompaniment. Freemasonry had — still has —  a reputation for secrecy, so the local lodge was unlikely to have been pleased at what was being shown onstage.

Most of it — the excitement of joining the EU, the twinning of UK towns with European equivalents of similar size and character– belongs to another era. But the petty power struggles of local politics are unlikely to have changed much. 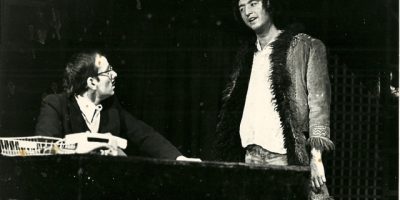