Each year the Young Vic puts on a community show in which a cast of locals (of all ages) performs alongside professional actors and musicians. This season, they have opted to mount a piece inspired by Ma Vie en Rose, Alain Berliner’s warm, funny and provocative 1997 movie about a seven-year-old boy who is convinced, despite all the evidence to the contrary, that he is a girl.

It’s a good choice. The censorious suburbanites in the manicured district where the boy’s family has just moved play a crucial part in the story. The director, Pete Harris, says the cast has fashioned “a show about a community, performed by a community, for a community” – a fact amusingly borne out when waves of the boy’s family’s middle-class neighbours descend on their housewarming garden party for regulation air-kissing and waltzes.

The piece dispenses with a script, and unfolds wordlessly in movement, mime and dance to a witty score by Gary Yershon. 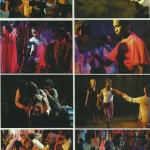