Having spent three years in repertory theatre, I was on a steep learning curve to acquaint myself with the ways of the West End.  By the time I joined the company, Jesus Christ Superstar had been running for six years. There was a real sense of being a cog in a wheel, a part in a production line rather than a part of a production. There was a clear hierarchy as far as the performers were concerned. I can’t remember being addressed by, or addressing a single word to, any of the leading players for the entire six months duration of my contract.  The turnover of chorus members was surprisingly fast. My colleagues were diving in and out of the casts of other West End shows or going on tours. They all seemed to me much more dedicated than I was. Many would come straight to the theatre from having had long days at dance classes and singing lessons or, in one case, weight-training sessions. Mostly, they were kind, warm-hearted people. I bonded with three in particular: James Chatto, John Conroy, and Anwen Rees.  I attended James’ wedding, but then sadly we lost track of each other. As did John and I, but we did encounter one another years later when we were both working at the Open Air Theatre in Regent’s Park. Many years intervened between meeting up with Anwen again, but when we did it was in particularly happy circumstances: we became neighbours. Alas, she and her husband, the late, great John Hurt, moved out of London not long before John died. But Anwen and I are still in touch, and I hope always will be.

There were two other major advantages to being in Superstar. One was the supervising musical director, Anthony Bowles. A real inspiration. The other advantage was that I had most of my days free: unlike rep, there was nothing to rehearse in the mornings or afternoons, except on the odd occasion when Anthony called us in because something grizzly had happened musically during the course of a performance. I had the time to appear in a couple of fringe shows; to MD a show at the Theatre Royal Stratford East; and to begin what was to become a pleasant, though on-off, relationship with BBC radio.

While I was in Superstar a general election was called. One of the guys in the company invited a group of us over to his Chelsea flat to watch the results come in. The Tories won. Margaret Thatcher was to be Prime Minister. I walked out into the spring sunshine and meandered through the streets on my way to Sloane Square station.  I came to the top of Pont Street, where Thatcher lived. Of course, it was heaving with radio and TV crews, police and public.  A lot of discontent was sown that day. I’ve never forgotten it.

During our time in the company,  fellow chorus member James Chatto took this photo of me which I used as a headshot for a while… 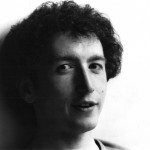