The Merchant of Venice

Composing and playing music for this production was my first professional work.

This lucky break came about because of Bob Carlton, best known today as creator of the stage musical adaptation of Return to the Forbidden Planet. Bob and I overlapped at Hull University – he was two years ahead of me. After he graduated, he returned to see a drama department show I’d composed for. When director John Blackmore was setting up a repertory company at the Duke’s Playhouse, Lancaster, with Bob as his associate, and was looking for a composer for his opening production, Bob recommended me.

The run of Merchant coincided with the start of my final year at Hull University, so a lot of time-consuming trans-Pennine commuting was involved.   My academic work suffered, to put it mildly.

I was asked to write some music for the next show at the Duke’s –  Brecht’s The Resistible Rise of Arturo Ui –  and for the Christmas pantomime, Cinderella. Then, to my delight,  John and Bob invited me to join the company as an actor-musician once my finals were out of the way. 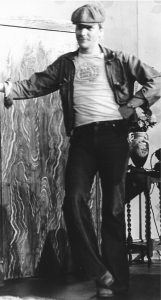